Get to Know What Lives in Your Soil

Healthy soil is the foundation for productive crops and a resilient farming system. When it comes to building soil health, we often talk about the physical and chemical properties of soil – things like soil texture, aggregate stability and soil organic matter. There is a third component of soil health, though, that is highlighted less frequently: the biological component.

At its most basic level, soil is made up of weathered rock material, water, air, and the remains of decomposed plants and animals. Beyond that, the soil is an entire functioning ecosystem full of life! In just one handful of soil, there can be billions of microorganisms, including some you’re probably already aware of, like bacteria and fungi.

Other living organisms in the soil can be classified as invertebrates. An invertebrate is simply an organism that does not have a backbone. Some common soil invertebrates include mollusks, earthworms, arthropods (i.e., insects, spiders and crustaceans), and nematodes. Soil invertebrates living beneath the soil surface may be harder to detect, but by familiarizing yourself with the most common invertebrate groups, you can be sure you won’t underestimate their impact on soil health and agriculture.

The role of arthropods and earthworms in agriculture is well-established. Arthropods, at the soil surface and beneath, are great decomposers and nutrient cyclers. Arthropods that feed on plant residue help to build soil organic matter and can impact soil fertility. Soil-dwelling arthropods can be pests (e.g., cutworms or white grubs), but they can also help to control pest populations. For example, ground beetles and spiders are arthropod predators that are often encountered in fields.

When earthworms move through the soil, they create channels that can help improve soil drainage. Earthworms also enhance soil structure and nutrient cycling through their movement and feeding habits. Scouting for earthworms is fairly simple and can be done by counting the number of earthworm middens on the soil surface. An earthworm midden is a small pile of plant material and worm castings (worm poop!) that can be found at the entrance of a worm burrow. The photo below shows five earthworm middens in a no-till field. Click on the link below the photo for more information. 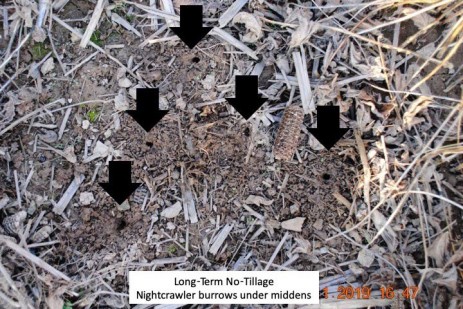 Nematodes – or microscopic roundworms – are lesser-known organisms in the soil. Plant-parasitic nematodes can be agricultural pests that impact plant health and yield by sucking out the contents of plant cells using piercing, needle-like mouthparts. This type of nematode can also vector plant diseases, such as tomato mosaic virus. There are also beneficial nematode groups that are present in healthy soils, such as bacteria feeding, fungal feeding, and predatory nematodes.

Nematode feeding damage is often misidentified as a nutrient deficiency in crops; plant symptoms – such as chlorosis, stunting, and wilting – are common examples. While some nematodes, like Soybean Cyst Nematode, can be visible on plant roots, most nematodes will require positive identification through a soil sample. When soil sampling for nematodes during the growing season, use a soil probe to sample 6-8 inches deep and sample at the base of the plant in the root zone. If sampling outside of the growing season, fall is the best time for detecting nematodes because populations will be at their highest. The head of a Corn Needle Nematode. This nematode feeds almost exclusively on corn roots and the economic threshold is just 1 or 2 individuals in 100 CC of soil (about a handful of soil). Stunt nematodes are plant-parasitic nematodes that feed on field and vegetable crops. The economic threshold for stunt nematodes varies by crop and soil type, but is 100-200 individuals in 100 CC of soil (about a handful of soil) in corn.

Time to Dig In

The soil is a living, functioning ecosystem full of organisms you can and can’t see. Microscopic or not, these organisms can have a big impact on your productivity. The next time you’re out in the field, keep an eye out for signs of earthworms and other invertebrates that can be seen with the naked eye. And, if you are interested in learning more about soil invertebrates on your farm, reach out to your SHP field manager or your local agronomist to explore scouting and soil sampling options. Should I plant green?

Making the Most of the Opportunities We’re Given

Setting Yourself Up for Success in the New Year

4 Soil Health Lessons We Learned in 2020